Looking back on my
girlhood I’m grateful that destiny gifted me with a loving musical role model who shaped my future and taught me the joy of writing songs. When I was an infant, only two weeks old, my mother, the breadwinner of the family, was forced to hand me over every morning so she could go to her job at the telephone company in Wichita Falls, Texas. One of my earliest memories is of a big plastic yellow radio that sat in the pass through window between the kitchen and dining room of the earthy clapboard middle class home where I spent weekdays with my babysitter, Bobby Carol. From the speakers of the radio, Buddy Holly, (who had by then died in the fateful plane crash) posthumously sang along with Bobby while she cleaned, ironed and baked homemade pies and biscuits. “That’ll Be The Day” and “Peggy Sue” and “Heartbeat…” She had a rich alto voice so I took her lead, parroting the harmony parts as if they were the melody.

Bobby was a paradox, a magnificently uncomplicated person with an ocean for a soul. She was one of those exceptional spirits so centered in her desires and beliefs that she could manage to be basically the same everyday, never moody, morose or overly dramatic. Happy or sad she dodged “the slings and arrows outrageous fortune” fires at even a lowly housewife without being knocked from her horse. She never said no when she could reasonably say yes and I loved her with all my heart.

There was, as in most houses of that time, a formal “living room” oddly named because it went unoccupied for the most part unless one was perusing the National Geographic magazine collection, decorating the Christmas tree, being inoculated by the family doctor making his occasional house call or greeting other guests who were too unknown to be invited into the “den” off the kitchen area where all the real living took place and where cartoons were watched. Sometimes, out of the blue and always when just the two of us were alone in the house of an afternoon a rare and beautiful hour would occur. Bobby would finally take a break, seating herself on the swiveling stool of the ornate pump organ, which was the centerpiece of the room. I would sit in the floor quietly watching in awe as she transformed from the hard working substitute mother in a cotton dress and homemade apron into an angel who brought down a very powerful magic by way of the tones exhaled from her chest in concert with the bellows of the fascinating instrument. As she rocked back and forth pumping with her feet, manipulating the keys and the stops with her elegant work worn hands, she and the clunking wooden machine became one. I followed as she drifted into a time continuum that was strangely different from our task based mediocrity into a place where everything, the timbre of her voice, the overtones from the organ and the space that surrounded each note hung absolutely still in the vibrating air that filled the room.

It was a truly holy experience, though the pieces were not always hymns. Show tunes and campfire cowboy and old world folklore ballads were decoded by a curious math, black and white spaces, staffs and circles and sophisticated symbols, scribed inside paper folders decorated with colorfully illustrated covers. I would practice drawing G and treble clefs. Notes and rests on lines intermingled with crayon daisies and houses and sunshines with faces and rays for hair and eyelashes. “What a Friend We Have In Jesus”, “Tumbling Tumbleweed” “Pennies From Heaven” “Stardust”, clever, trippy words and melodies took us far away as we wandered through songs and songs and songs!

Innocently I discovered that this new realm existed and began to experiment and found that by singing whatever was happening, whether playing or bathing or even drifting off to sleep, I could filter reality back into that wonderfully still place where what is can be named and better understood by way of a mysterious alchemy… where the metal of a normal life becomes gold. 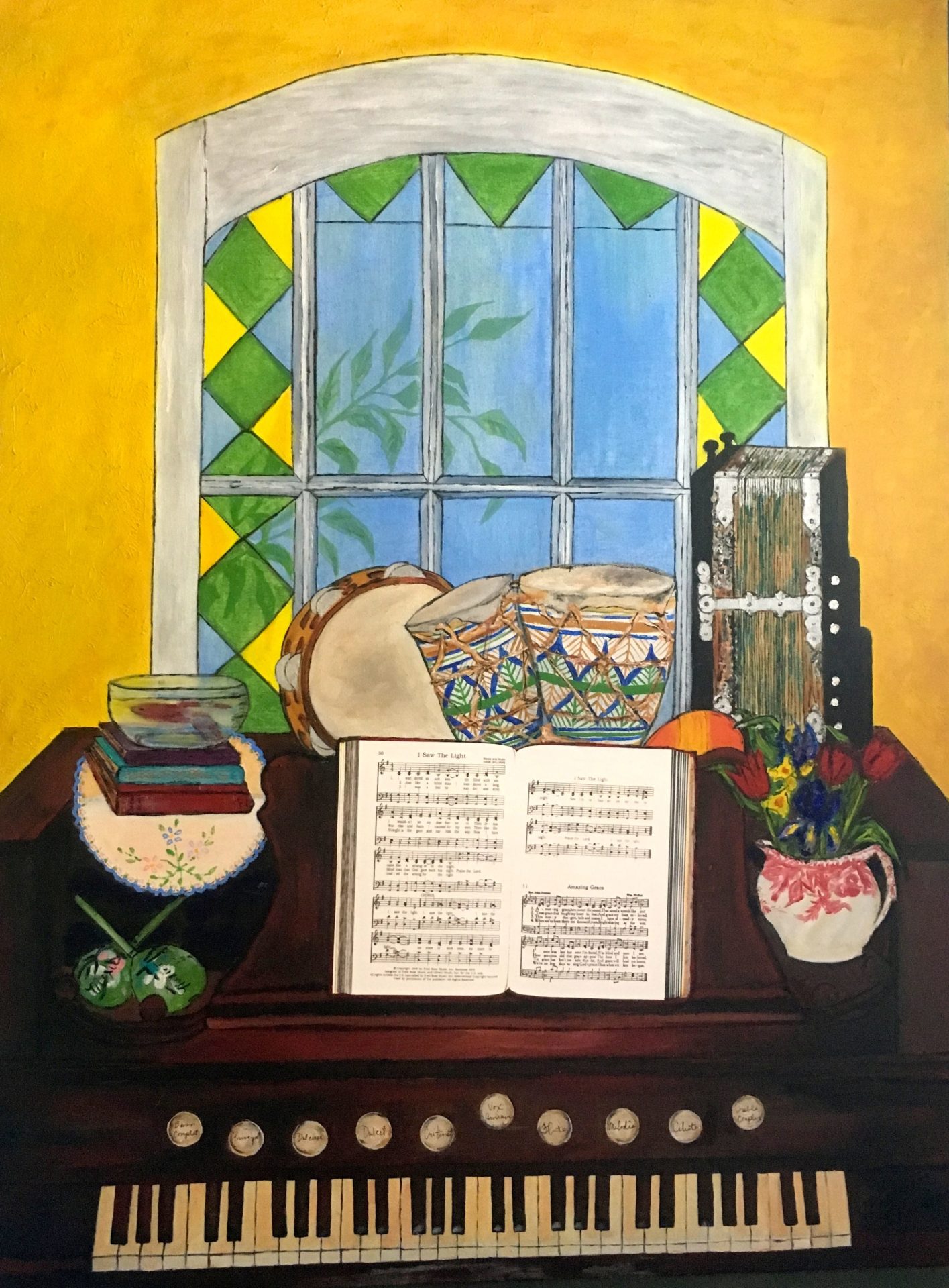 Oil on Canvas by Kimmie Rhodes

I learned to think in this way as a kid and to this day when I‘ve gone to “that place” in my mind people tell me they say things to me several times before I hear them. My own children laugh and tease me about how they became accustomed to having to bring me back from dreamland by finally yelling, “Mama, Mama, MAMA!” I’ve heard it referred to as “having your head in the clouds.” I call it writing, though there is no pen and paper involved.

Somewhere on a level beneath what happens the meaning of life is hidden and it’s a poets’ work to find and bring it into the daylight. I’m hooked on spotting the irony that’s buried slightly below the obvious because it brings me clarity and peace of mind. Without writing I would be trapped inside with no way out of myself. The added pleasure of being able to communicate through underscored rhymes, using sounds that speak deeper than words is to me like the eighth wonder of the universe.

Here are links to some of my songs, which I think best express the meaning and happiness of those wonderful childhood days.

Love & Happiness For You (Love Me Like A Song CD)

This Is The Gift (Rich From The Journey CD)

The sound of the precious old pump organ, which now resides in my studio can be heard on these recordings:

We’ve Done This Before (Picture In A Frame CD)

Witness To The Crime (Love Me Like A Song CD)

Note: This and future archival posts include excerpts from “Radio Dreams” the combined memoirs of Kimmie Rhodes and Joe Gracey scheduled for release Spring 2018.  Read Synopsis