A poignant look at the joy, innocence, passion, courage heartbreak and redemption that lies at the heart of the Kimmie Rhodes and Joe Gracey love story. Not only is Radio Dreams a testament to human resilience, it’s some of the finest tag-team word-smithing I’ve ever come by.

This dual memoir invites readers into the unique and private world of platinum-selling songwriter and recording artist Kimmie Rhodes and her soul mate, beloved radio personality Joe Gracey, who died in 2011. Weaving her own poetic prose with wry and witty words from his journals, Rhodes returns him to the conversation to tell the fascinating story of their three decades together. Her trippy songwriter’s tales and his hilarious and poignant writings will take you on a time-machine adventure from Saturday mornings spent watching country-and-western stars on TV to the wild ‘70s era in which the hippies, weary from protesting the raging Vietnam War, joined the rednecks to kick back and play some music in the “Groover’s Paradise” of Austin, Texas. Riding with fellow outlaws Willie Nelson, Waylon Jennings, Cowboy Jack Clement, Emmylou Harris, Stevie Ray Vaughan, Doug Sahm, and other famous—and infamous—characters, they help turn Austin into a scene and outlaw country into a sound before facing Gracey’s final cancer battle. Through triumph and tragedy, grief and gratitude, their story speaks of the extraordinary life and inspiring love they shared.

Born in 1950, Gracey had become a renegade early on. Rejecting expectations that he would follow his father and grandfather into the legal profession, he pursued his passion for radio, beginning his broadcasting career at a station in Fort Worth, Texas, while still in his teens. Dancing to the beat of the freak-redneck revolution, he later became the celebrated Pied Piper of Austin’s early music scene as an award-winning disc jockey, journalist, talent coordinator for the TV show Austin City Limits, and popular local crooner of country songs. Sadly, just as his star was rising on a recording career, fate dealt a cruel and ironic blow with aggressive head and neck cancer, leaving him alive but unable to speak, forever silencing the deep, rich, iconic voice of a genre that had become known internationally as progressive country.

Rhodes was born in 1954 and raised in Lubbock, Texas, the windblown, much-romanticized town that gave the world Buddy Holly. Her father, a Depression-era orphan adopted by a hoochie-coochie dancer, became a carnie. He taught Rhodes to sing when she was six. Like a real-life version of the father-daughter duo in the film Paper Moon, he would employ her talents to distract car salesmen and their customers while he checked in on the dealership’s back-office bookmaking operation. By the 1970s, she had become a street-savvy hippie chick. Enticed by Grace Slick’s “one pill makes you larger and one pill makes you small” chant, Rhodes, like Alice, fell down a rabbit hole that eventually landed her in Austin’s Electric Graceyland Studios, where Gracey had found a new way forward by positioning himself on the other side of the glass as a recording engineer, record producer, and independent label entrepreneur.

With Rhodes as his interpreter and Gracey as her “everything,” they embarked on a synchronistic adventure as lovers and muses, while successfully traversing the wilds of the music business as critically acclaimed artists and writers. Then Gracey’s cancer returned 2009, and despite heroic attempts to save his life, he passed away. Rhodes dropped down yet another rabbit hole: the long, dark tunnel of grief. Her honest and inspirational account of how she climbed out to explore a new world offers comfort and hope to others whose lives have been affected by cancer. 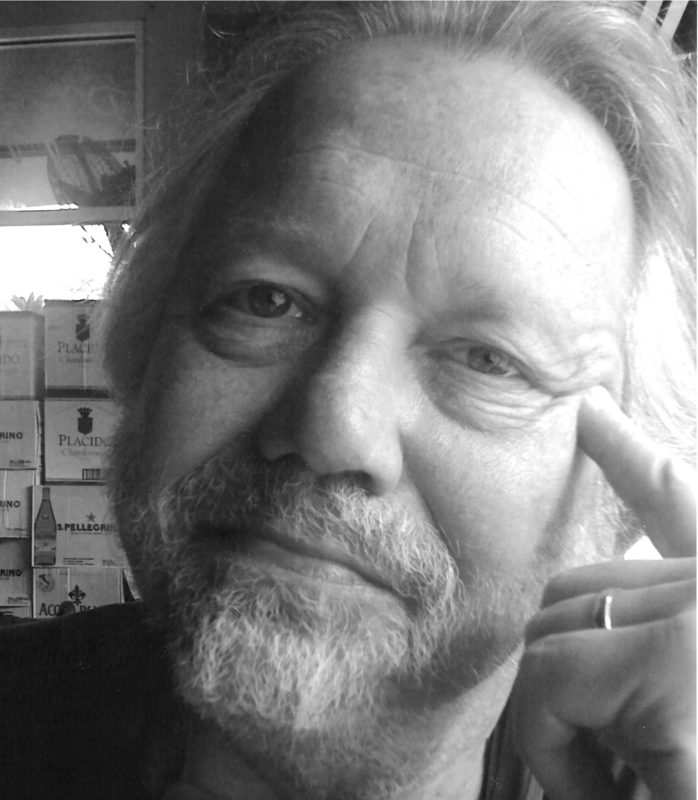 Joe Gracey, from Fort Worth, Texas, was a natural-born communicator from an early age who became a country music disc jockey for KXOL-AM and FM while still in high school. He attended the University of Texas at Austin, earning a degree in American studies while moonlighting on Austin Top-40 station KNOW-AM and writing the Austin American-Statesman’s first rock music column. In 1974, he joined Austin’s KOKE-FM, the world’s first progressive-country radio station, and helped the station earn its Billboard magazine Trendsetter of the Year award. Gracey also served as talent coordinator for the first season of Austin City Limits, the longest-running music series on American television. Gracey left radio to establish Electric Graceyland studio, where he produced some of the first recordings by blues legend Stevie Ray Vaughan. In 1979, Gracey lost his voice to cancer, but continued engineering and producing, as well as performing as a bassist and rhythm guitarist. In 1996, he engineered Willie Nelson’s groundbreaking album, Spirit. In 2003, he recorded Picture in a Frame, Nelson’s duets album with Kimmie Rhodes, and the Grammy-nominated Nelson–Ray Price duet album, Run That by Me One More Time. A gourmet cook and wine connoisseur, Gracey contributed articles and recipes to Saveur magazine. Gracey’s head and neck cancer returned in 2009. After a long battle with the disease, he died on November 17, 2011. 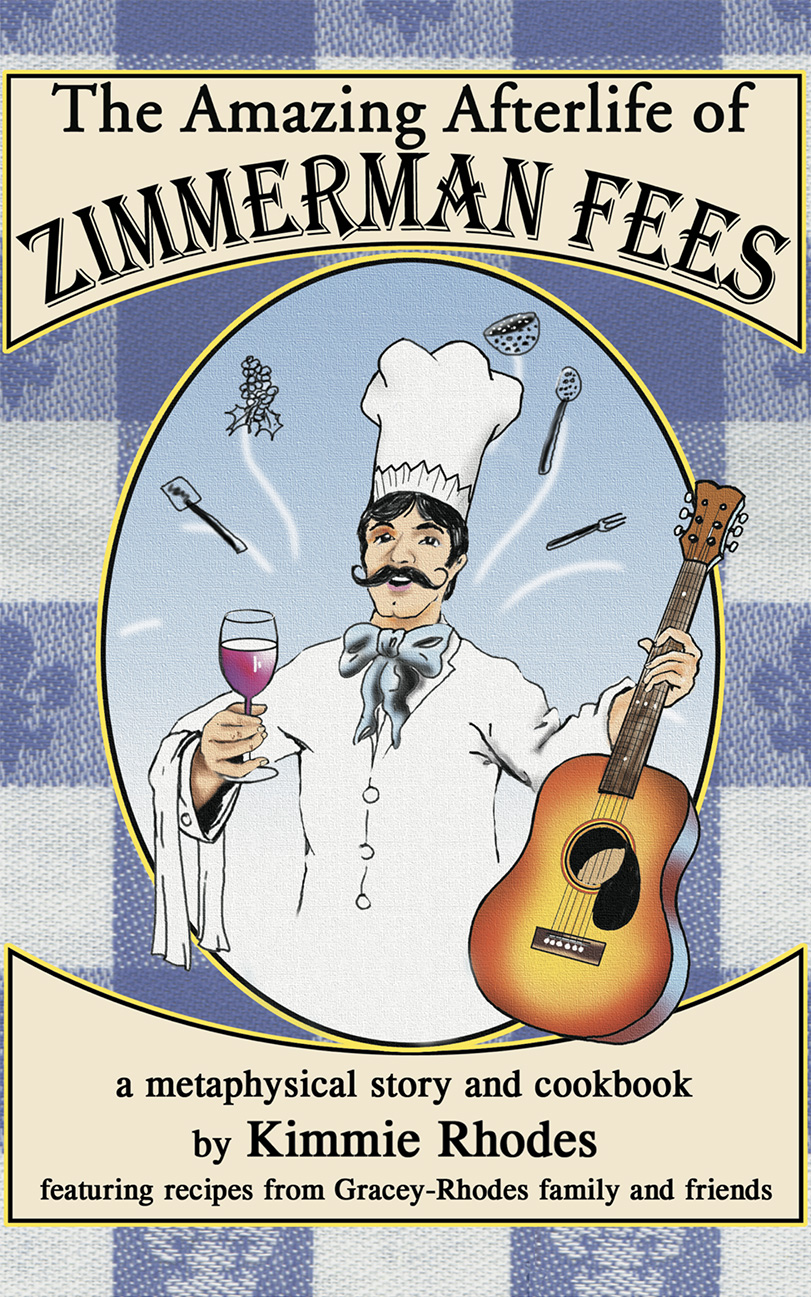 Kimmie suprises us again, this time with a novel-length story about one Zimmerman Fees as he makes his way through his afterlife adventures. Woven into the tale are over eighty recipes by Joe Gracey (the enchilada recipe is featured in the April/May issue of Saveur Magazine) and Kimmie as well as friends and family. 140 pages long, full of wacky side-trips, intriguing characters and soulful cooking. This is a facet of Kimmie Rhodes that we have not seen before. If you like her songs, we think you will like her tales too.