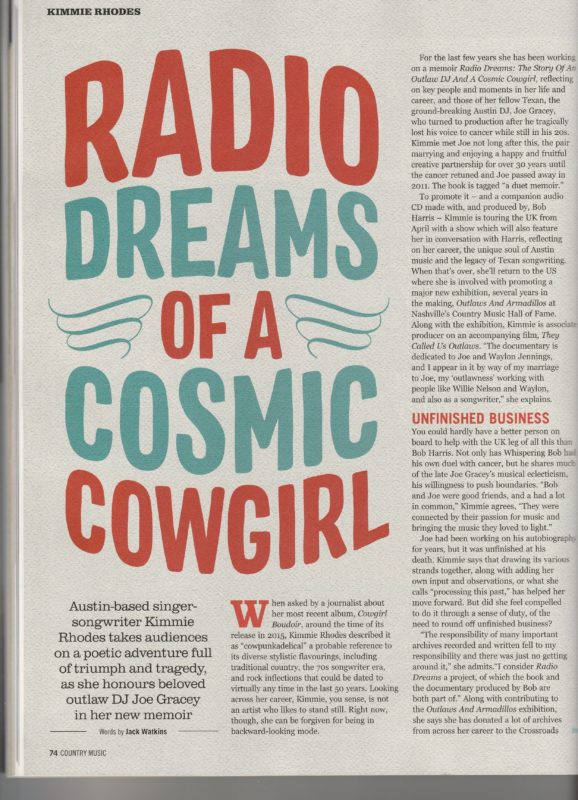 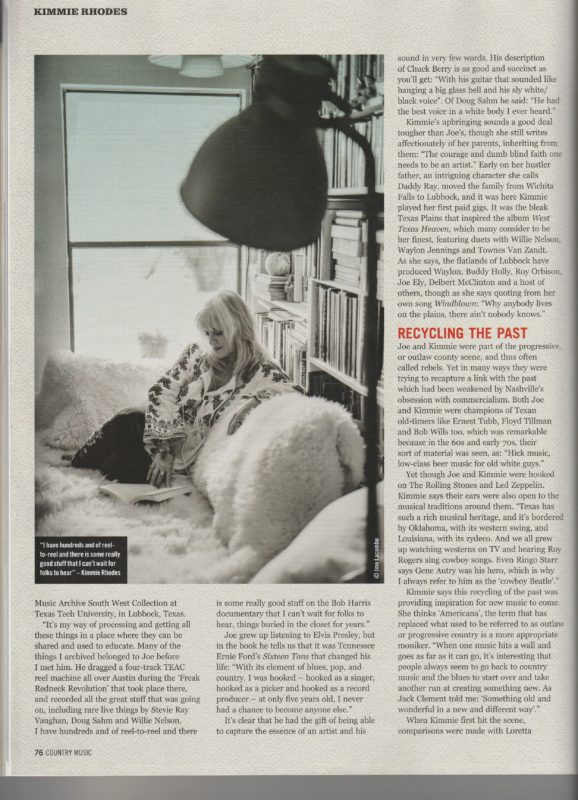 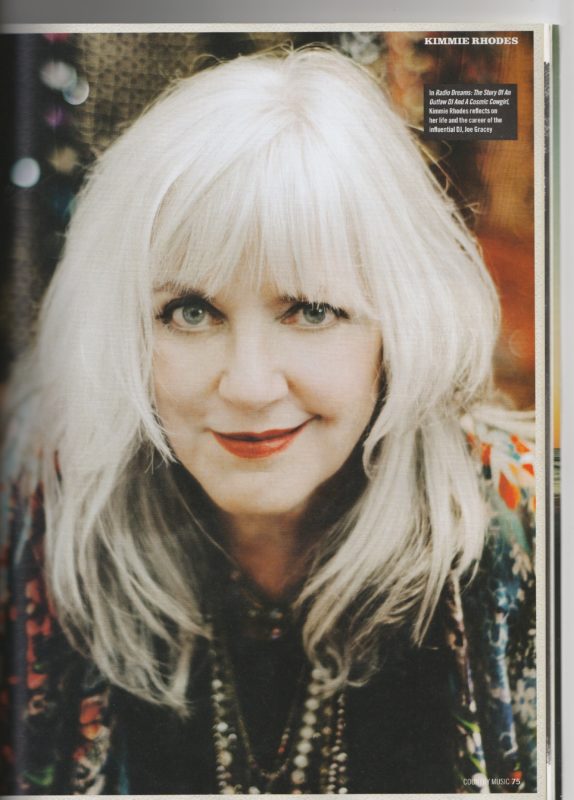 What an adventure! I just spent last week in my hometown Lubbock, Texas with some really great people getting a LOT of good work done on the Radio Dreams Project, working in the Crossroads of Texas Music archives department at Texas Tech, helping hand over many pictures, recordings, writings, memorabilia, costumes, original scripts and drawings from theatre productions. I also visited and lectured a 20th Century Music, Texas Music Race Class and Gender, Women’s Studies and songwriting class.

One of the biggest highlights of the week was “Women and West Texas Music” a Lubbock community event, hosted by Dr. Curtis Peoples, at the International Cultural Center featuring a panel discussion and some music… Guests: Kimmie Rhodes (Musician, playwright, and author), Amy Maner (Producer, designer, and Lubbock Lights documentarian), Kathleen Hudson (Educator, and author of “Women in Texas Music” and “Telling Stories, Writing Songs: An Album of Texas Songwriters”), Tamara Saviano (Grammy Award winner, Guy Clark biographer, and manager for Kris Kristofferson’s record label, among other things) and Diana Finlay Hendricks (Delbert McClinton biographer, educator, writer.) It was a real honor to share the stage with such talented writers and producers. The first session was a 45 minute on stage discussion about my new book “Radio Dreams,” which included some songs. The second session was all women on stage discussing their careers and ties to West Texas music. For more information contact Curtis Peoples 806-834-5777, curtis.peoples@ttu.edu

As an ambassador for The Buddy Holly Educational Foundation http://www.tbhef.org  I performed and told stories at a book signing event hosted by The Buddy Holly Center. https://www.mylubbock.us/departmental-websites/departments/buddy-holly-center/home

Thanks to all of you who made this possible by supporting the Radio Dreams Project! Below are some pictures taken of the work and events.

Stay tuned for the next phase… The Country Music Hall of Fame Museum comes to our home in Austin to pick up all the tapes and many other precious things we are donating to the museum in anticipation of the “Outlaws and Armadillos: County’s Roaring 70’s” exhibit that opens May 25 and runs through February 14, 2021. Here’s a link to that for details>    https://countrymusichalloffame.org/exhibits/exhibitdetail/outlaws

PS Special thanks to Curtis and Amber Peoples, Jim and Kathy Gilbreath and Bella and Grant Gerlich for feeding us and making us feel welcomed! 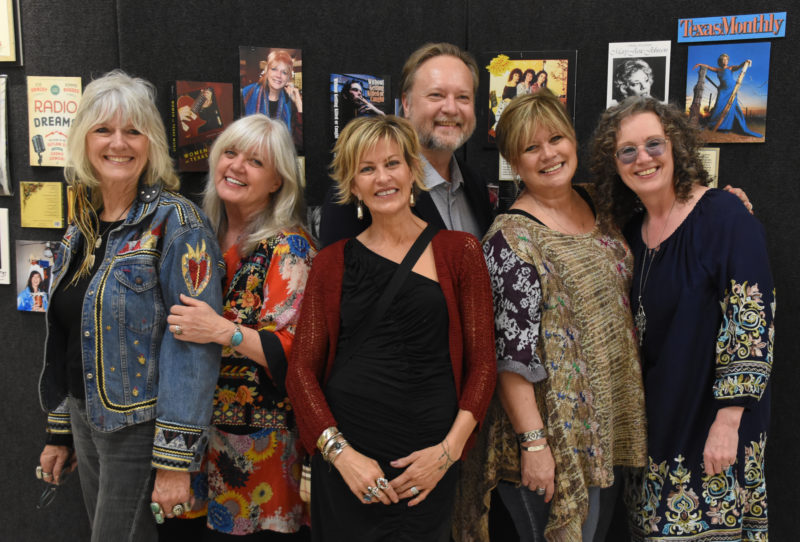 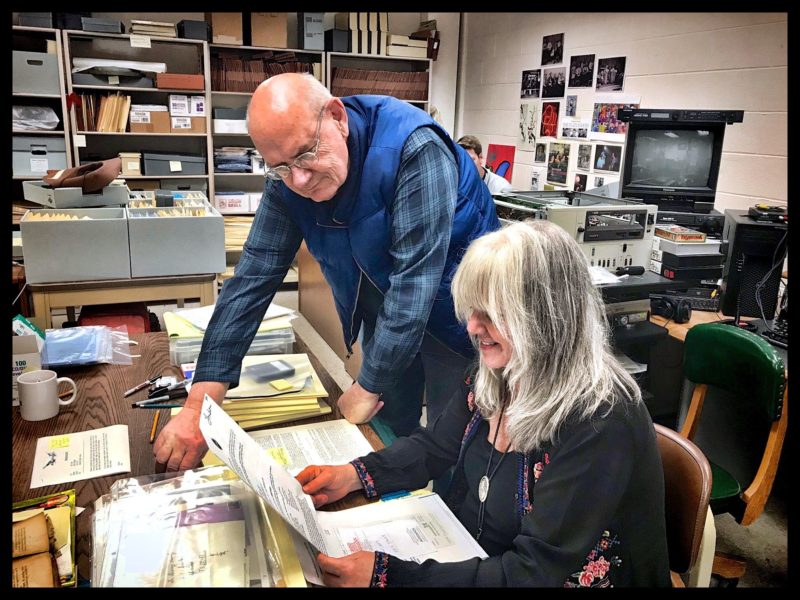 Working with Jon Holmes, the archives manager, was a lot of fun and a real education in how to do it right.  He’s the most organized human on the planet! We told LOTS of stories. He made me remember and label the date of everything. He even brought down the Jesse Taylor photographs so Diana Hendricks and I could help identify the people in them.

Archives 20% processed after one week of work. 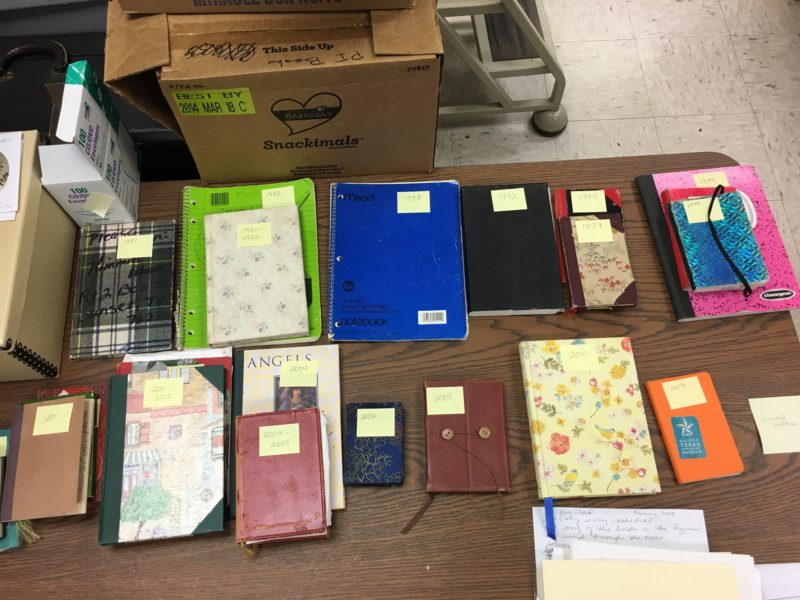 Three decades of my writing journals, finally dated and in chronological order. Many unfinished songs in there! 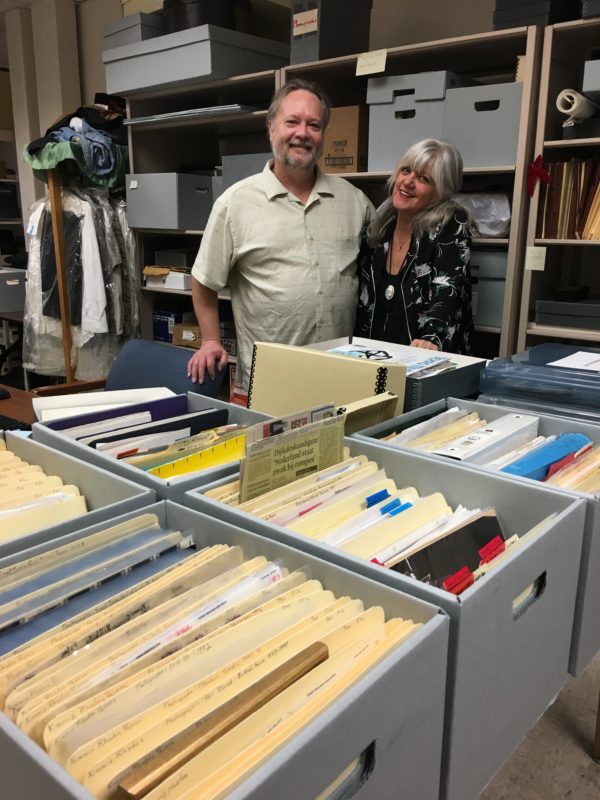 Dr. Curtis Peoples, historian and head of the department, checked in on us regularly. His dedication and passion for preserving and recording the history is an inspiration. I’m very grateful for his interest and his help placing these archives in a permanent place where they can be used for education and research. Curtis not only booked all the events for the adventure and arranged scheduling but also escorted me to all of the classes I visited and lectured during the week. 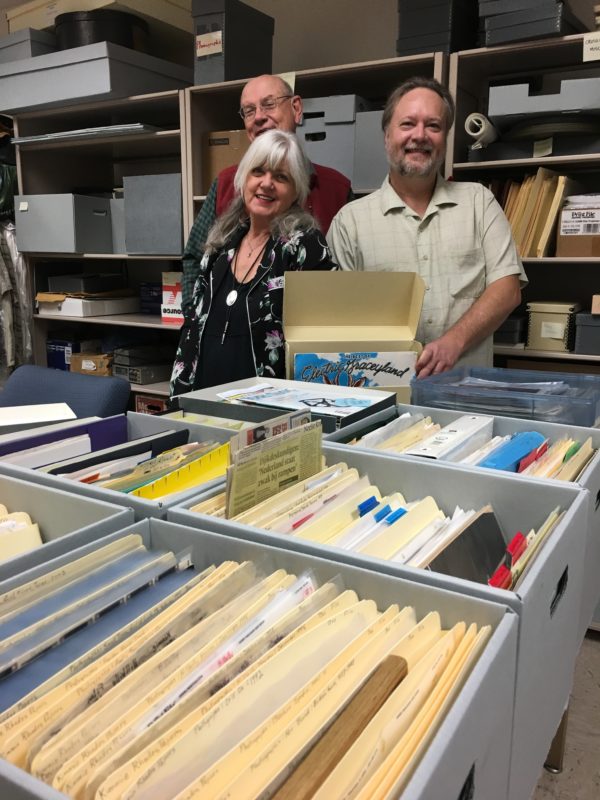 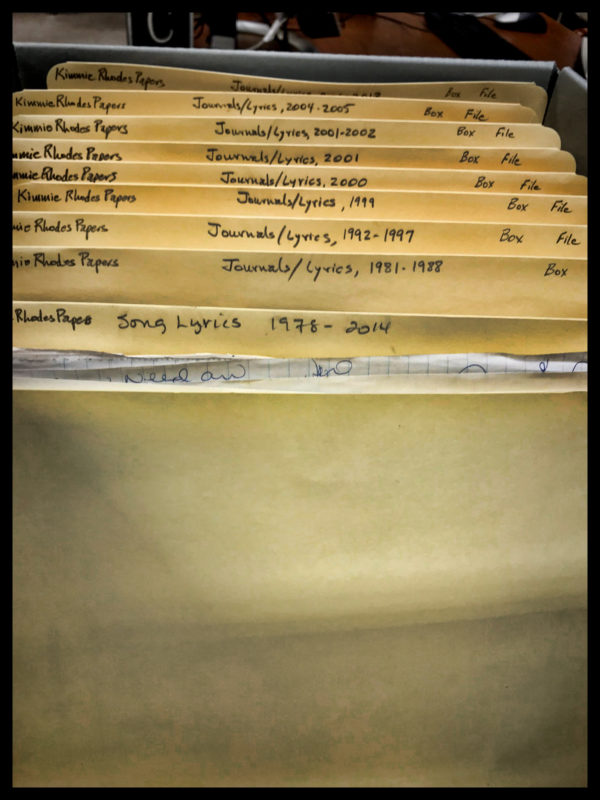 Journals and lyrics dated and labeled and filed in acid free materials ready for processing and cataloguing. 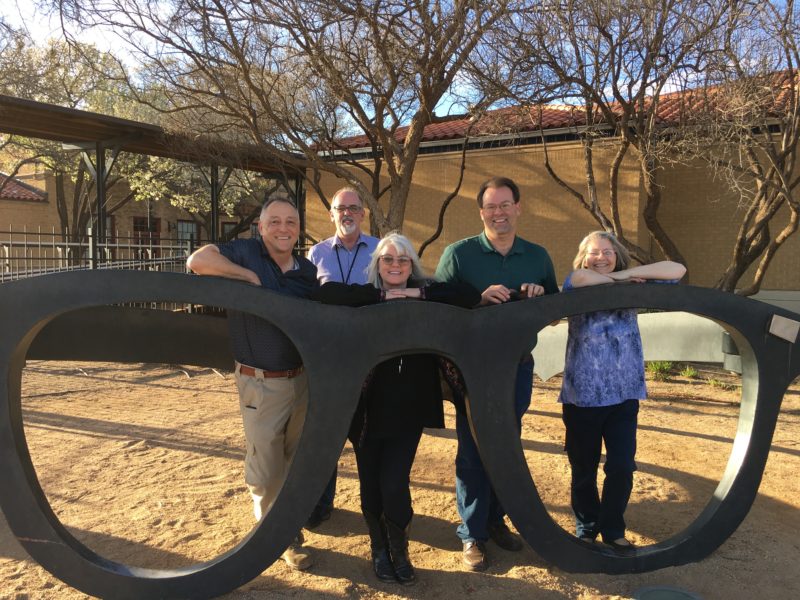 Thanks to the good folks at The Buddy Holly Center for hosting a successful book signing for “Radio Dreams” that included a tour, performance and storytelling. I also had a chance to discuss my treasure I have placed there on loan for the next few years… my autographed lyric sheet from the day Waylon Jennings and I wrote our song “Lines” and sing the song. Here’s what it looks like below… 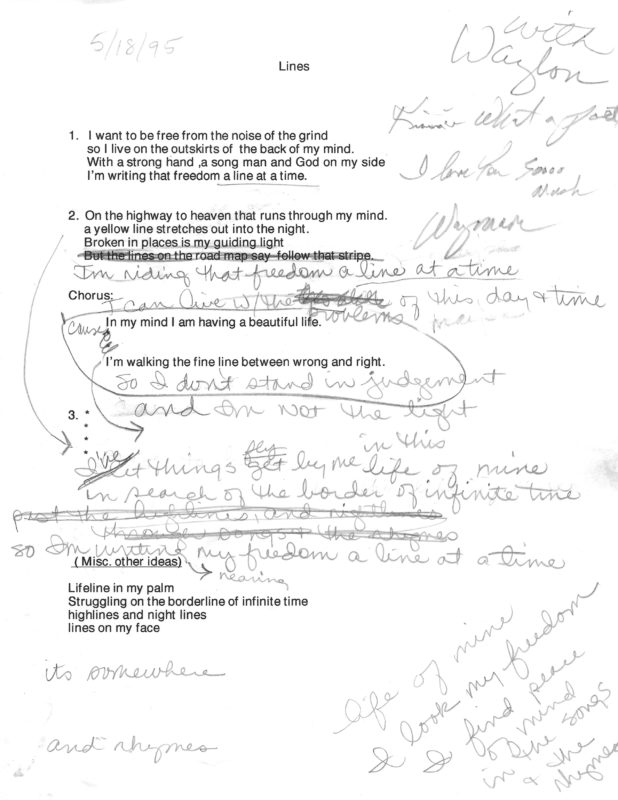 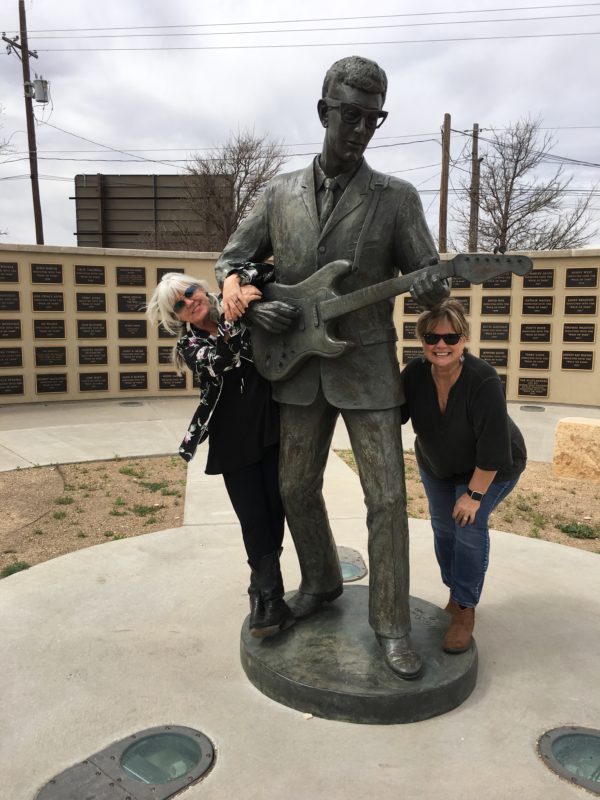 Kimmie Rhodes and Diana Finlay Hendricks at The Walk of Fame in Lubbock, Texas

Telling the story of Radio Dreams and how the book and project began at the Women and West Texas Music event. (photo by Jim Eppler) 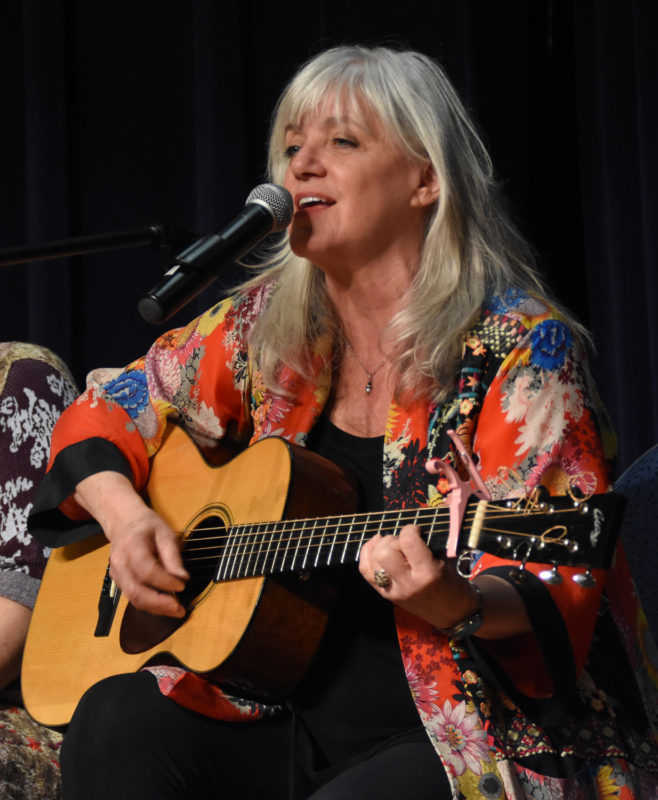 Singing the song “Radio Dreams” written with Gary Nicholson at the Women and West Texas Music event. Press play to hear it and read the lyrics below. (photo by Jim Eppler)

I felt a change coming over me

I got a guitar and played Beatles and Stones

Soon I was making up songs of my own

I started to be who I wanted to be

From the dashboard speakers of my Chevy one day

The magic came drifting in on the airwaves

I heard my own voice coming back to me 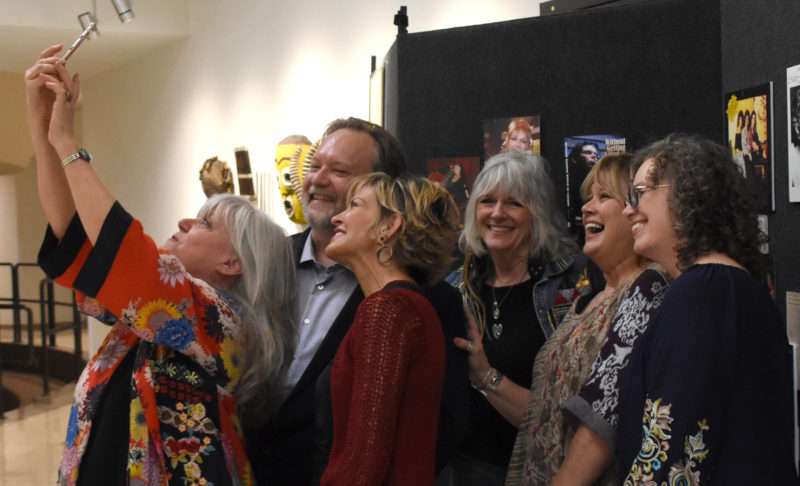 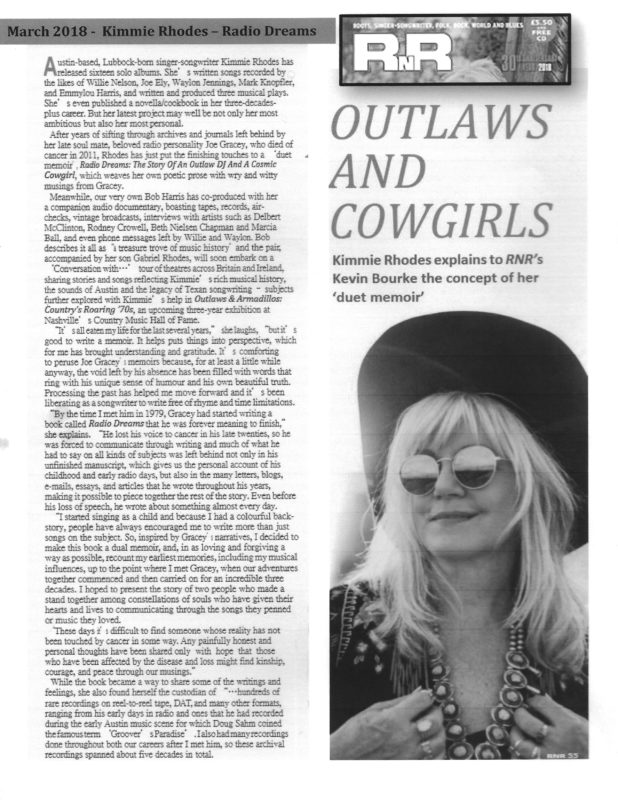 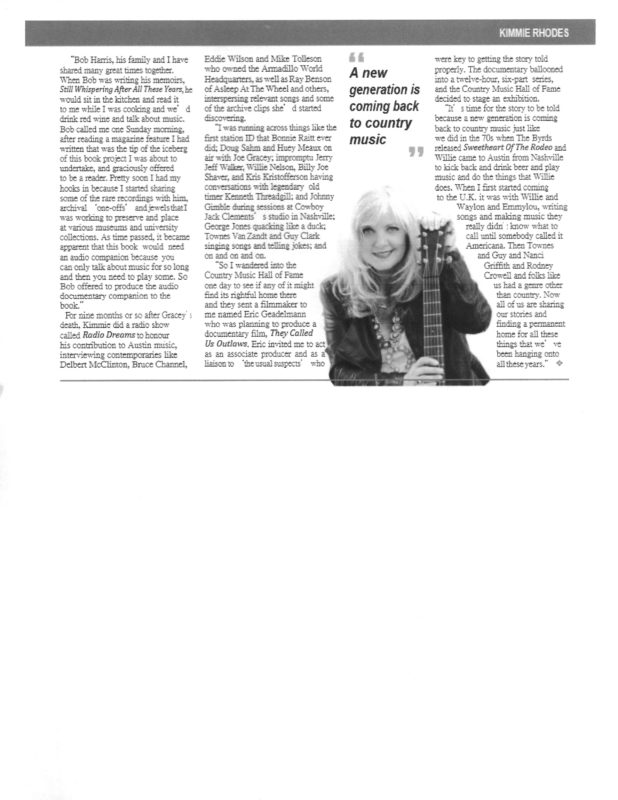