Listen to Kimmie’s audio version of this blog post which emanates from the car radio of Terry Allen’s “Road Angel” sculpture at Laguna Gloria Art Museum in Austin, TX 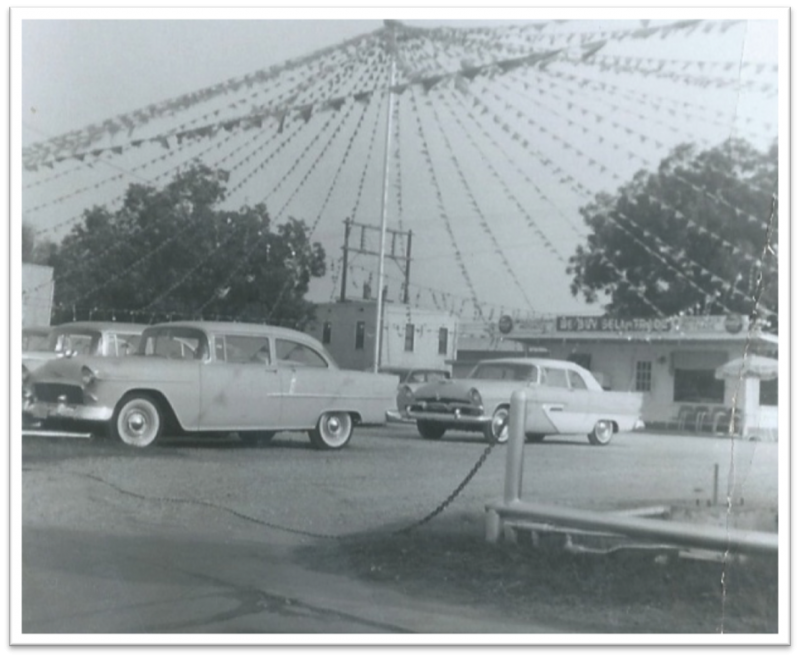 I first heard about heaven attending worship services at 23rd and Grace, the Church of Christ, where my babysitter took me as a child. If you were “good” during your lifetime on some undisclosed day a shout would unexpectedly come from the sky and angels would begin playing harp music to awaken yours and others spirits which could then rise up from their graves and drift to “The Promised Land,” where heaven was located. Once you had arrived at “The Pearly Gates ” you were screened by a saint named Peter who checked “The Book of Life” to be sure you were where you belonged. If indeed you were on the list and gained clearance, greatly relieved, you were welcomed through the gates onto streets that were “paved with gold” into “the most beautiful place you could imagine” where you could then spend eternity in a blissful garden setting amongst departed loved ones and docile beasts. Once I had gotten my head as best I could around a time continuum with no end… ever… my small mind moved forward delighted and amused by trying to picture paradise.

My father was an abandoned child, an orphan, a self-made boy with a second grade education who became a mathematics whiz on the sidewalks of Wichita Falls, Texas. 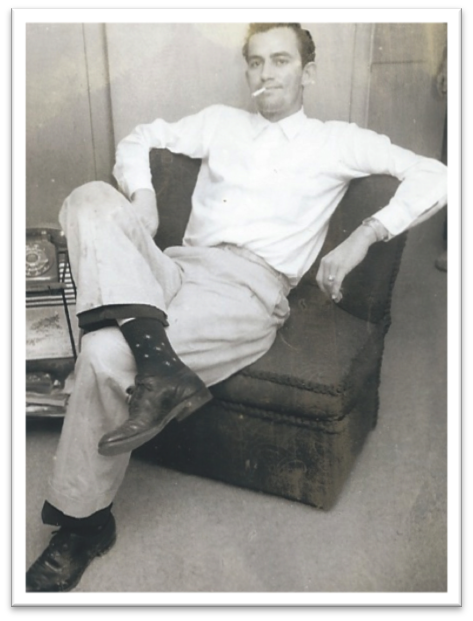 At the tender age of seven years he bravely set up shop across the street from the window of the drugstore where his much older sister, Gladys, who was a small town Marilyn Monroe, worked behind the counter. He bragged that he made more money during the Great Depression than most adults by selling Gladys’ phone number to passing men after making sure they also purchased a newspaper whilst he was “spit shining” their shoes. He claimed to be able to sell an Eskimo a refrigerator or a man “his own hat.” He taught himself to read and write but was awful at spelling.

By the time I was five years old, Daddy, because he had curtailed his drinking somewhat, had managed to work his way up from the shoeshine business to owning a brand new used car lot. He took great pride in the row of “slick one owners” and “cherries” with prices and sales slogans cleverly sponged onto the windshields in white shoe polish. Our glistening “spotless” “previously owned” “low mileage” automobiles lined the front of the lot which was covered by a grand open air tent made of colorful plastic flags that flapped crisply against the backdrop of the blue sky. Then one day that sky turned a toxic shade of green and a twister spun down from a darkly looming Cumulonimbus and blew the lovely hard earned cars away rendering our family penniless in the short space of one afternoon.

I’ve never really understood why such a good-hearted and generous man was dealt such a cruel hand. Ever the prince of reinvention, lured by the opportunities of the nearest boomtown, Daddy Ray made a decision to pack up the family and move farther up tornado alley to Lubbock, Texas where my Uncle Les owned a pool hall named “The Golden Cue.” Aunt Gladys and a few other ragtag friends followed, settling in the area and soon we had another new world of our own. Daddy sold advertising by presenting samples from a leather case, hustled pool, flipped the occasional used car, took illegal football bets in backrooms and bars and studied in the evenings for a real estate license. My Mom worked at the telephone company and I began my longed for first year of school at Dupre Elementary.

Our religious denomination changed to The Southern Baptist Church, Mama’s preference. Now the sacred hymns we sang could be accompanied by Hammond organ but the tone of the sermons became threatening and grim. One Sunday morning the preacher chose “The Judgment Day” as his topic. Repeatedly slamming The Holy Bible on the pulpit in dramatically timed intervals and screaming in rehearsed vocals that rose and fell like Beethoven’s 5th symphony the scary man spoke not of a land of hope and wonder but of a hell where there was “weeping and gnashing of teeth” and a “brimstone fire” that mysteriously never quite consumed your melting flesh completely so as to wrench you with pain for (again)… eternity… meaning forever. To make matters worse The Devil, a clever mean guy who tricked you into going to hell stoked the furnace. The day when this hell was to begin was apparently the same day as the shout and harp music one that was to send the good souls drifting off to heaven, but now it had a name… judgment.

Having been uprooted less than a year before, I was immersed in fearful contemplation as we left the church that day. During the two hour drive to Aunt Gladys’ house in Odessa where we were to dine I vowed to myself to never do one bad thing ever again that might anger the God and his son Jesus whom I’d always thought loved me.

While the meal was being prepared I wandered outside onto the covered back porch of the house, which faced a vast expanse of plowed flatland that would have stretched all the way to the horizon had it not been interrupted by a roiling black cloud peculiar to arid regions known as an Haboob. Driven by cold fronts from the easterly winds these dreaded monsters overtake a sunny day like a freight train gathering every grain of stray dirt that has been kicked up by cultivation for the springtime planting of cotton, which is the mainstay of The Great Plains economy.

Staring in quizzical amazement at the rapidly approaching phenomenon it began to dawn on me that I was standing directly in the pathway of something biblical that was about to happen. The fact that I’d been deeply pensive for the past several hours was not lost on my big brother, Michael, who was a professional opportunist when it came to torturing me. Lounging on the porch swing, too stupid to be alarmed, he nonchalantly remarked, “Oops! Looks like the judgment day is about to be here!” Mobilized by the shocking realization that I wouldn’t after all be having the time I’d counted on all afternoon to repent for my sins I hit the screen door to the kitchen and began circling the table which had been set for lunch crying in horror, “The end is here! The end is here! It’s the end of time! It’s the Judgment Day! We are all going to hell!!! Run!!!!!

My parents, unaware of the approaching calamity, tried to calm me but by then the storm had begun hitting the house. Cracking lightening bolts rattled the windows as gigantic mud globs mixed with golf ball sized hail pummeled Gladys’ vulnerable rent house smacking the roof with a vengeance only God could rain down on us wicked trapped inside. Hiding beneath the table, eyes closed in prayer and shaking uncontrollably, visions of ghosts rising from nearby graveyards underscored by haunting harp melodies rendered me inconsolable as I waited for the earth to open and receive us all, especially my dad and brother, into the fiery depths of hell.

Mercifully, and most probably because my repentant shrieks were heard on high, we were spared and soon the sun was shining again and the few trees that existed in “The Panhandle” area glistened with raindrops as we headed home leaving the past stretching safely behind us. Monday morning, the first day of the rest of our lives, was just a short night’s sleep away and there would be all the time in the world to try to be better people.

In the days following my divine forgiveness, as we drove down Broadway Street in downtown Lubbock, I imagined a magnificent “West Texas Heaven” because that was the only landscape I had ever known. The bricks that paved the street (which I had been told were laid by prisoners) were solid gold and the park at Buffalo Lakes was lush with flowers, like in the Garden of Eden. My favorite place in the city, Prairie Dog Town, was running with lions that would gladly and peacefully lie down with the tiny mound dwelling creatures as well as any lambs that might come along.

This became the inspiration in later years for a love song I wrote about leaving those innocent days behind. It became the title track of an album that featured duets with Willie Nelson, Waylon Jennings and Townes Van Zandt, recorded at Willie’s Pedernales Recording Studio in Austin, Texas and Jack Clements’ Cowboy Arms Hotel and Recording Spa in Nashville, Tennessee. It was the first recording session my son and producer Gabriel Rhodes ever played with me and the signature guitar part he created for the intro set the tone for the entire track and I think made the song a success. One day out of the blue my publicist received a call from David Letterman requesting I play “West Texas Heaven” on his show. I requested that Gabriel come with me to play with the stellar house band.

As I stood singing my song on the stage of the famous theatre in New York City where the Beatles played their American debut on the Ed Sullivan Show I remembered the night I sat cross-legged on the floor in our little house on 27th Street in Lubbock watching. I realized I was standing in roughly the same spot John Lennon had been when he was crooning “she loves you yeah… yeah… yeah…” Thank Heaven that now “the most beautiful place I can imagine” looks more like somewhere along the French Riviera!

This and future blog posts include excerpts from “Radio Dreams” the combined memoirs of Kimmie Rhodes and Joe Gracey scheduled for release Spring 2018. For more information or to pre-order a signed first addition copy please visit the book page of this website.